CORE MYTHS: CAN DEVELOPING YOUR ABS ACTUALLY HURT YOUR BACK?

CORE MYTHS: CAN DEVELOPING YOUR ABS ACTUALLY HURT YOUR BACK?

The genesis of much of the ab work we do these days probably lies in the work done in an Australian physiotherapy lab during the mid- 1990’s. Researchers there, hoping to elucidate the underlying cause of back pain, attached electrodes to people’s midsections and directed them to rapidly raise and lower their arms, like the alarmist robot in “Lost in Space”. In those with healthy backs, the scientists found, a deep abdominal muscle tensed several milliseconds before the arms rose. The brain apparently alerted the muscle, the transverses abdominis, to brace the spine in the advance of movement. In those with back pain, however, the transverses abdominis didn’t fire 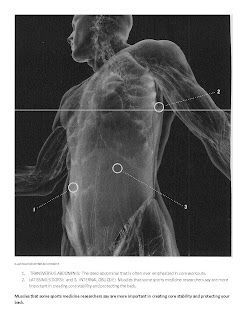 early. The spine wasn’t ready for the flailing. It wobbled and ached. Perhaps, the researchers theorized, the increasing abdominal strength could erase back pain. The lab worked with the patients in pan to isolate and strengthen that particular deep muscle, in part by sucking in their guts during exercises. The results, though mixed, showed some promise against sore backs.

From that highly technical foray into rehabilitative medicine, a booming industry of fitness classes was born, “The idea leaked” into gyms and Pilates classes that core health was “all about the Transversus abdominis,” Thomas Nesser, an associate professor of physical education at Indiana State University who has studied core fitness, told me recently. Personal trainers began directing clients to pull in their bally buttons during crunches on Swiss balls or to press their backs against the floor during sit-ups, deeply hollowing their stomachs, then curling up one spinal segment at a time. “People are now spending hours trying to strengthen their deep ab muscles”, Nesser said.

But there is growing dissent among sports scientists about whether al of this attention to the deep abdominal muscles actually gives you a more powerful core and a stronger back and whether it’s even safe. A provocative article published in The British Journal of Sports Medicine last year asserted that some of the key findings from the first Australian study of back pain might be wrong. Moreover, even if they were true for some people in pain, the results might not apply to the generally healthy and fit whose trunk muscles weren’t misfiring in the first place.

“There’s so much mythology out there about the core,” maintains Stuart McGill, a highly regarded professor of spine biomechanics at the University of Waterloo in Canada and a back-pain clinician who has been crusading against ab exercises that require hollowing your belly. “The idea has reached trainers and through them the public that the core means only the abs. There is no science behind that idea.”

The “core” remains a somewhat nebulous concept; but most researchers consider it the corset of muscles and connective tissue that encircle and hold the spine in place. If your core is stable, your spine remains upright while your body swivels around it. But, McGill says, the muscles forming the core must be balanced to allow the spine to bear large loads. If you concentrate on strengthening only one set of muscles within the core, you can destabilize your spine by pulling it out of alignment. Think of the spine as a fishing rod supported by muscular guy wires. If all of the wires are tensed equally, the rod stays straight. “If you pull the wires closer to the spine,” McGill says, as you do when you pull in your stomach while trying to isolate the transverses abdominis, “what happens?” The rod buckles. So, too, he said, can your spine if you overly focus on the deep abdominal muscles. “In research at our lab,” he went on to say, “the amount of load that the spine can bear without injury was greatly reduced when subjects pulled in their belly buttons” during crunches and other exercises.

Instead, he suggests, a core exercise program should emphasize all of the major muscles that girdle the spine, including but not concentrating on the abs. “Side plank” (lie on your side and raise your upper body) and “bird dog” (in which, from all fours, you raise an alternate arm and leg) exercise the important muscles embedded along the back and sides of the core. As for the abdominals, no sit-ups, McGill said; they place devastating loads on the disks. An approved crunch begins with you lying down, one knee bent, and hands [positioned beneath the lower back for support. “Do not hollow your stomach or press your back against the floor,” McGill says. Gently lift your head and shoulders, hold briefly and relax back down. These three exercises done regularly, McGill said, can provide well-rounded, thorough core stability. And they avoid the pitfalls of the all-abs core routine. “I see too many people.” McGill told me with a sigh, “who have six-pack abs, and a ruined back.”

See how the AB-Inforcer is the only objective core trainer that encourages good form, “bracing — not hollowing” the spinal stabilizers and provides feedback underneath the back, taking the place of having to subjectively use your hands.

· AB-Inforcer Core exercises at a glance: