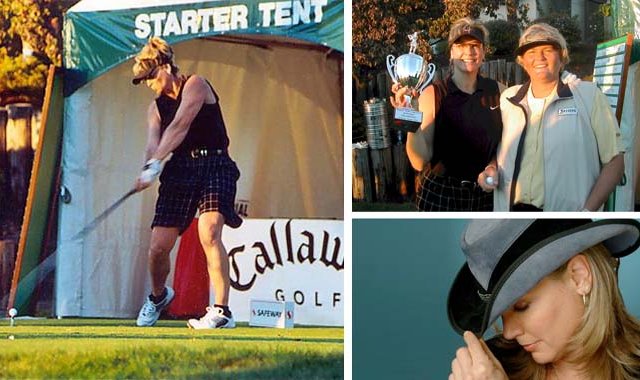 Editor’s note: The RE/MAX World Long Drive Championship started Sept. 18 in Mesquite, Nev., and will finish with the Open Division finals Oct. 30 in Las Vegas. To celebrate the event, which attracts hundreds of golfers from dozens of countries, Golfweek is compiling a series of profiles of prominent long-drive participants who helped shape the sport.
One moment, Lee Brandon was a rising star in the arena of strength training and physical conditioning. She was an assistant trainer for the New York Jets, the first women to hold such a position in the National Football League.
The next moment, she was falling through a glass doorway and severing her left arm almost completely. The incident occurred before stricter regulations on the construction of glass doors were enacted.
Brandon ultimately would recover and become the women’s world champion in the RE/MAX World Long Drive Championship. Looking back, it was the accident that set the tone for her life.
“I remember waking up (from surgery),” she said. “I expected my arm to be gone. I looked over, and it was there. I couldn’t feel it, but it was there.”
A doctor approached her. “We used an experimental procedure,” he said. “We don’t know if we’ll have to remove your arm.”
Gradually she regained feeling – and then motion – in the arm. As this was happening, she made up her mind that she, as a trainer, would help as many people as possible with their physical problems, big or small. She would devote her life to it.
“At first, I thought my life was over,” Brandon said. “Then I realized I had to readjust my thinking.”
Today Brandon, 51, is known as an expert in coping with or eliminating back pain among athletes. She trains individuals in many sports. Her clients range from Olympians to celebrities to ordinary people. She also is a popular motivational speaker, spreading the gospel of dedicated training.
Golf became her litmus test, if you will. She was 35 and had never hit a golf ball in her life. Regardless, one of her clients challenged her to a long-drive contest. If she won, the client would buy her a membership at a golf club along with golf lessons. If he won, his prize would be free training for a year.
She won, slugging a 265-yard drive with an awkward stance and grip.
“I don’t care that I’m the oldest woman in the competition,” Brandon said at the 2013 RE/MAX World Championship. “If I can help reinforce the importance of golf fitness, then I’m making an important contribution. This long-drive championship is a showcase for fitness.”
Brandon is a tall, strong woman who has surpassed 350 yards in long-drive competition under favorable conditions. “I don’t feel bad about being powerful and gifted,” she said. “If there are 40 to 50 million women my size, I would like to encourage all of them to use their natural athletic talents.”
Observed Art Sellinger, founder and CEO of Long Drivers of America, which runs the world championship: “The RE/MAX does more than just shine a spotlight on men and women who can hit the golf ball a very long way. It recognizes some people who believe in helping others and who make the world a better place.
“What Lee has done is remarkable, and we are honored to have her as a past champion in this event.”
Hint: Guys, forget all the testosterone talk and man-up rhetoric. Do not challenge her to a long-drive contest.
• Read about more long-drive legends here.