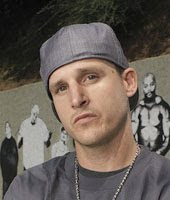 “SKATEBOARDER’S ROCK HARD CORE”
Rob Dyrdek is a professional skateboarder
and co-star of the MTV reality show Rob & Big.
“In my nearly 20 years as a professional skateboarder, I have been approached by countless fitness professionals and kinesiologists claiming to have an innovative piece of training equipment that would forever change the way I trained and strengthened my core. I must admit, at first glance, I felt that the AB-Inforcer® was just another gadget that would tell me things I already knew about my body. Man was I wrong! The AB-Inforcer® is the first and only tool I have ever encountered that not only detects and measures asymmetries in core strength, but can also be used as a tool for everyday training, monitoring progress, and ultimately creating a rock-solid core. I have never felt stronger, and my skating has never been better, and that is in big part due to the integration of the AB-Inforcer® into my daily workouts. I cannot say enough good things about Lee Brandon and the AB-Inforcer®. Thank You!” www.robdyrdek.com